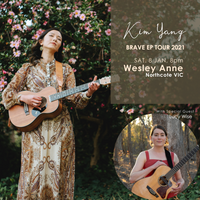 Kim Yang is a Taiwanese-Australian indie-folk singer-songwriter based in Canberra, her ethereal voice, evocative lyrics, and soothing fingerpicking capture the attention of passers-by. Kim writes songs that speak from her experiences as a partner, a daughter, a traveller and an insecure soul. Her soulful blend of sounds balances delicately between vulnerability and power.

In 2019 Kim went on tour for her debut EP Ocean of Mind after a sold-out launch, she then played at the National Folk Festival 2019, Enlighten Festival 2020, TedxCanberra: Fearless and Good Folk 2021 alongside Fanny Lumsden and StiffGins. Kim supported ARIA awarded artists Josh Pyke and Ben Lee on their recent tours to Canberra.

Kim released her 2nd EP Brave in September 2021, which is partially funded by artsACT. Brave EP is full of emotions and messages that need to be told in our modern world. It tells you that being vulnerable, courageous, loving, and different is human nature. After all, you’re not alone.

Kim is set to be on tour in January 2022. Wesley Anne is her first stop followed by Cygnet Folk Festival in Cygnet, TAS on 14-16 January, and MONA in Hobart on 17 January.

On Saturday 8 January, Kim will be playing a trio set featuring support from local favourite Lucy Wise at Wesley Anne. Come join them for an intimate and heartfelt evening.

"Breathtaking; I felt like Kim had grabbed me by the hand and carried me through an amazing secret garden. There is a stillness in this much like walking through a forest, aware of how small we are in comparison to nature. It's humbling. Kim Yang is a force of nature, and she humbles me." - Nkechi Anele, Triple J

“Kim’s clear tones hit you from the very first note she sings. Her voice reminds me of the timbre of Eva Cassidy mixed with the breathiness of Sarah McLachlan. In a word, beautiful” — Ruth O’Brien, BMA Magazine